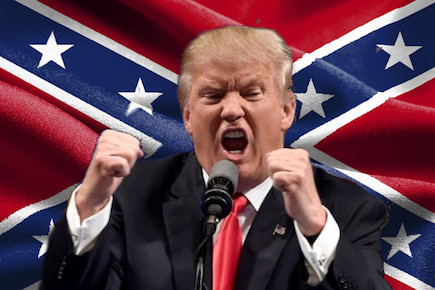 Trump has been accused of being a racist since he first began to campaign for president in 2015. Of course, some Democrats seem to believe that all Republicans are racists.

When Joe Biden entered the Democratic primary, he referenced the Nazi/white supremacist protest in Charlottesville, Virginia, and Trump’s response to it as the reason he finally decided to enter the race. Biden received plaudits for his courageous stand against bigotry.  But what was racist about Trump’s reaction to Charlottesville?  The President spoke out against violence and the loss of life, and he condemned the white nationalists.  At the same time, he expressed some understanding and sympathy for both groups of peaceful demonstrators at the scene — those protesting symbols of a racist past and those seeking to preserve memorials to heroes of times gone by.  Trump’s enemies could hardly wait to distort his words and say that he gave peaceful protesters and white supremacists “moral equivalence.”

More recently President Trump was confronted with the Ahmaud Arbery affair.  Some pollical opponents and media pundits blamed the tragic shooting of Arbery in Brunswick, Georgia, on the racist atmosphere created by the Trump administration.  Was that fair? When the President was told about the Arbery shooting he called it “very disturbing,” and he added that “My heart goes out to the parents, and the family, and the friends.”  His critics would not have been satisfied had Trump donned sackcloth and poured ashes over his head.

A few of Trump’s critics carry their charges of racism to outrageous extremes.  For instance, MSMBC host Joy Reid said President Donald Trump is attempting to move on from the coronavirus pandemic and reopen the economy because the reopening is “disproportionately killing people who are black and brown, which is not his base.”

What a vicious accusation! If Joy Reid’s charges are true, we have a heartless monster in the White House.

Is it any wonder that the President  lashes out at the media?

But is Trump a racist?

During the first three years of Trump’s Presidency:

Do those appear to be racist acts?

All of these signs of progress came to a screeching halt with the arrival of COVID-19.

Let us pray that the forward march will resume later this year.  I believe that Trump is the man to lead us.