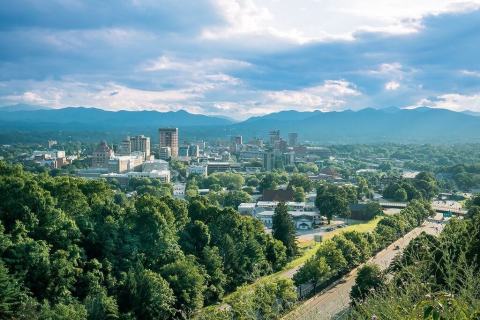 North Carolina extends about 500 miles east to west, from the Atlantic seashore to the Appalachian mountains.  As a young boy I lived about half-way between, near the city of Greensboro; and during the summer we would usually vacation at the shore.  Eventually, my father purchased property at Carolina Beach, and we moved there in the summer of 1938.

Once we made our home at the beach, we started taking our vacations in the mountains, usually somewhere near Asheville, North Carolina.  I always loved the beauty of the highlands, and I spent many happy days in those hills.  The Appalachians are not as spectacular as the Rockies, but in their own way they are just as attractive.

My dear wife, Ann, organized the first of our family reunions at Myrtle Beach in 1981. Beginning with the family reunion in 1996, we began having our family gatherings every two years at a beautiful Methodist retreat center located on the shores of Lake Junaluska, twenty miles west of Asheville.  Those biennial reunions continued until 2004, after which they became more infrequent.  We met last at Junaluska in July 2017.  If health permits, I hope to arrange for another reunion there in the summer of 2021.

To me, those times of family fellowship are like a foretaste of heaven.

Down in the Valley

One thought on “The Hills of Carolina”