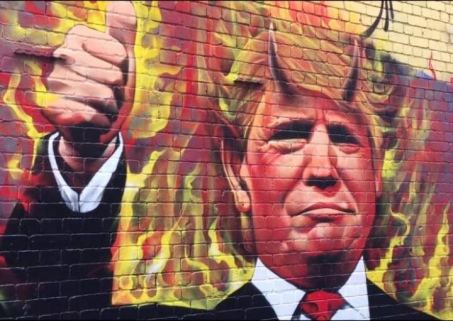 The late and much loved Charles Krauthammer coined the phrase “The Bush Derangement Syndrome” to describe what he described as “the acute onset of paranoia in otherwise normal people in reaction to the policies, the Presidency – nay – the very existence of George W. Bush.” Later he modified this medical term to “The Trump Derangement Syndrome” to describe an even more virulent form of the disease.

I had great respect for Dr. Krauthammer.  He was a licensed psychiatrist as well as a brilliant political commentator.  This time, however, I believe he got it wrong.  The onset of Trump derangement is more than a syndrome.  It would be more accurate to label it as a raving psychosis of the most severe sort.  I discovered this last week when I happened to stumble upon a political discussion forum.

I posted my article about “Trump and the Evangelicals” on this other web site in hopes of getting an intelligent and informed discussion on this important subject.  I realize that many Christians struggle over what to do about Trump.  They are aware of his many personal shortcomings. They hate his boorishness and sometimes vicious conduct toward his political opponents.  At the same time, they have been very pleased by many of Trump’s accomplishments; and they are distressed by the quality of his opposition.  I share the opinion of most believers that each of the Democratic presidential candidates has serious flaws, and as a group they support progressive social policies that are at variance with traditional Christian beliefs.  Whatever his true attitude on matters of faith may be, Trump has consistently supported conservative Christian causes.

I tried to express these thoughts in my article.

A few of the respondents made logical and reasonable arguments in answer to my article, but the majority filled their posts with nothing but bile.  Many of them appear to dislike the President so much that it is impossible for them to engage in civil debate.  They hatred for Trump spills over into condemnation for anyone stupid enough to support him or suggest they might vote for him in 2020.

I was called a bigot, gullible, a hypocrite, incapable of thinking, a fraud, naïve, a Judas, hell-bound, stupid, dumb, a heretic, a liar, and a pharisee — and these were the printable insults.  Evidently, the very thought of someone identifying himself as an Evangelical Christian but supporting our evil President pushes their manic button.

By the way, in professing my Christian beliefs I did not seek to assert any moral superiority. I only wished to explain my world view.  I am a sinful man, and I am just as likely to be mistaken in my politics as anyone else.  I should, however, be able to state my opinions without having my character maligned.

It is rather sad to consider how this country is so ideologically divided.  I attribute much of this to the media, to Hollywood, and to the Democrats. Their virulent assaults on the President are unceasing.  It appears that, in their eyes, he can do no good. Of course, Trump contributes his own fuel to the flames.  He viciously attacks the Hollywood elites and derides mainstream media as fake news, and he often does it in a nasty, provocative manner.  This provokes a hysterical frenzy among his opponents.

Can we restore more civility to political discourse in this nation?  A study of our political history reveals that abusive partisan rhetoric is not a new phenomenon, but the present depth of animosity between our political parties is almost without precedent.

Calm yourselves, my fellow citizens. I believe the nation will survive no matter who wins in 2020.