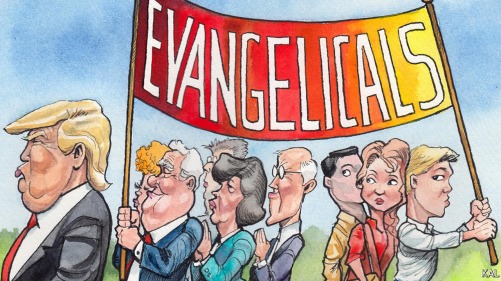 About a week before Christmas the editor of Christianity Today, a magazine founded by the late, beloved Billy Graham, wrote a scathing editorial about President Donald Trump and insisted that he should be removed from office.  Some liberal commentators appeared delighted by this evident dissension in the ranks of Evangelical Christians.  Is Trump finally losing support among his most loyal adherents?

Mark Galli is the editor of Christianity Today. Evidence suggests that his opinion represents a small minority among conservative white Protestants, most of whom continue to support President Trump.  The same cannot be said about African-American Christians, the vast majority of whom hold fast to their long-standing and fervent dislike of all things Republican – including Trump.

Christians of every variety would doubtless agree with Galli’s assessment that Trump can be an unpleasant person and often does not evince the Christian virtues of personal modesty and loving kindness toward his fellow men.  Galli describes him as being akin to a man who provides well for his family and is good to his children but is a wifebeater and should be thrown out of the house.  Galli acknowledges that many Evangelicals support the President because he is pro-life and supports other conservative Christian causes.  Nevertheless, the editor considers Trump unstable, dangerous and a true threat to the nation.

I believe Galli overstates the case against Trump.  While acknowledging his un-Christian, unpleasant braggadocio and petty nastiness against those who oppose him, I see no evidence of true mental instability.  Indeed, Trump has been remarkably consistent in pursuing the goals that he outlined in his Presidential campaign: reducing regulatory restraints on business, lowering taxes, working out better trade arrangements with other countries, strengthening the military, etc.  Few Presidents have accomplished more in three years in office.  Is that a mark of instability or incompetence? At the same time, he has vigorously supported numerous causes important to the Evangelical community. And even though Trump is often careless with the truth and frequently makes intemperate attacks against the press and other institutions of our democracy, I do not believe he poses any real threat to the nation.  Indeed, I am convinced that a far greater danger exists from left-wing ideologues who wish to alter the very nature of our republic.

As I have often stated, Trumps greatest strength among conservative Christians is the nature and quality of his opposition. Most Evangelical Christians are far more fearful of Democrat Party candidates who stump for socialism and legislation such as the Equality Act (more properly labeled as the Anti-Christian/Pro-LGBT Act) than they are of Trump.