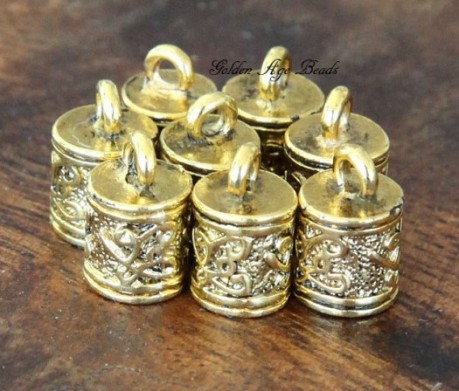 During the holidays I visited a new store that was advertising exotic gifts for upscale shoppers.  I have never thought of myself as upscale, but I decided to drop in and see what my more affluent neighbors might be interested in.

A number of fascinating items were on display.  There was a gorgeous cape fashioned from the feathers of colorful tropical birds.  Another item was a magnificent dresser set made of mother of pearl and embedded with a variety of precious stones — diamonds, emeralds, and rubies.  Even more attractive to me was a world globe on which the various geographical features were beautifully defined in vibrant colors and softly illuminated by a light within.

The most interesting exhibit of all was at the rear of the store.  There I saw a line of about fifteen containers, each exquisitely shaped and gilded with gold and platinum leaf.  As I drew near, I discovered that each container bore a label.  I began to examine them more closely.

I called over a member of the store’s staff.

“I believe there’s a labeling error here,” I said.  “Surely politicians’ brains can’t be that more valuable than the others.”

“Sir,” the clerk responded, “You can’t imagine how many politicians we had to shoot to fill that container.”