I returned home from Korea in September 1954, and Ann and I began building a home and growing a family.  And the family did grow.  Our son Sandy Jr. was born in November 1953 while I was overseas.  Stuart came along in 1956, Harold in 1959, Robert in 1960, and Eric in 1964.  All the boys were blond and blue-eyed like their mother.  I worked in several jobs at various locations after leaving the Army in 1954, but in May 1957 I went to work at the National Security Agency, and in September we moved into a townhouse in Greenbelt, Maryland.   I remained with the agency for the next 37 years.

Ann often took her sons with her on shopping excursions, and the seven of us occupied an entire row on one side of the aisle in the small church sanctuary that we attended.  We were very proud of our boys, and we thanked God for the precious gift.  We considered them our golden treasures.

One day, when Ann was out with the lot of them, a lady whom she met asked my wife if she was Catholic.  Ann’s quick response, “No, just a passionate Protestant.” 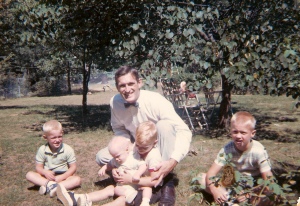 Of course, not all was sunlight and roses.  Providing for that growing family was not always easy, and finances were sometimes tight.  Nevertheless, food was abundant, and no one went away from our table hungry.  Ann was a marvelous cook, and all our sons could consume prodigious amounts of grub.  I believe that we provided a comfortable, loving environment for them all.

Naturally there were the usual bumps and bruises of childhood.  Sandy Jr, broke his arm, Harold inadvertently swallowed chlorox, Stuart ruptured his spleen, and Robert crushed his hands in an industrial accident.  It is a wonder that any boy survives childhood.  Yet, somehow, most of them do.  And each of our sons grew up to a loving Christian man, unstinting in their support for us and for their own families.  They have been and continue to be a true blessing.

(After finally getting this shot, the photographer is said to have flown to Africa and joined the French Foreign Legion.)