In these rather grim times I thought I would be good to repeat two or three of my lighter entries from the past.  This one, “Pantie Raids,” was posted on August 5, 2018.  Those of you new to this blog may not have read it.

Sexuality and the human sexual drive is a very powerful thing, and heterosexual libido sometimes erupts in overt and ridiculous ways.

I went off to college in 1947, long before the sexual revolution of the 1960-70s.  There were female dorms and male dorms, and never the twain shall meet.  That was the theory, but it never worked out quite that way in practice.

During my undergraduate days at the University of North Carolina I observed the so-called “pantie raid” craze.  It started at some school up north and then spread to colleges around the nation.  Anyway, a “pantie raid” involved a gang of male students, most often members of a particular fraternity, rushing into a female dormitory or sorority house and stealing various items of womens’ clothing, particularly lingerie. I am convinced that some female students also got an emotional charge out of these escapades.  The craze finally arrived at Chapel Hill, and a few raids took place there.  I was a bit of a prude and had no interest in participating in these particular hi-jinks, but I observed one of these raids from a distance with some amusement. 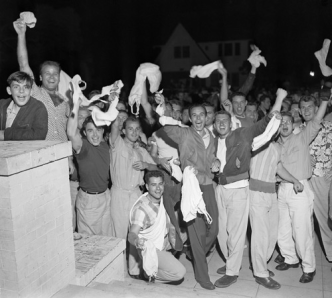 A Group of Highly Educated Raiders

Some years later at the government agency where I worked I had a reminder of the “pantie raids”.   I had a friend at the agency named Dave F who had attended the University of Iowa.  Dave was even more of a fuddy-duddy than I was — straight laced, eagle scout, professing Christian, etc.  One day Dave told me a sad story about his own “pantie raid” experience.  It seems that at Iowa U many of his fraternity brothers had participated in such a raid.  Dave had come upon the scene and saw a close friend emerging from a window in a women’s dorm with a lamp in his hand (evidently his friend had been unable to get his hands on some panties).  Dave accosted his friend and warned him that he would get into trouble for stealing the lamp.  Dave managed to persuade his friend to give up the lamp, and then Dave reached his hand through the dorm window and placed the lamp on a table.  As he did this a man standing inside the room snapped Dave’s photograph with a large flash camera.  Dave recoiled in horror.  He explained to the photographer that he was not a pantie raider and that he was returning the lamp — not stealing it.  The photographer only smiled and said nothing.

That wasn’t the end of Dave’s story.  Ten years passed, and Dave had just been hired by my agency.  He was sitting in the cafeteria with some other new hires when he overheard some fellows at another table talking about him.  “A sly fellow.”  “Still waters run deep.”  etc.  To his utter amazement, he discovered that his fellow employees were reading a recently issued scandal magazine containing a retrospective review of the “pantie raid” craze of the previous decade.  A full-page photograph used to illustrate the article showed a wide-eyed Dave F reaching his arm through a window with a lamp in his hand.

Dave bought every copy of that magazine on the agency newsstand and took them home and burned them.