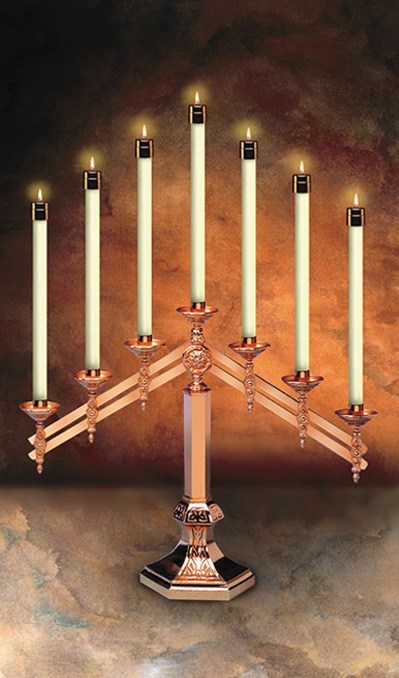 Yes.  Don’t tell me. I agree that there is no such word as candelabric.  That said, let me proceed with my story.

Each of can probably recall some embarrassing moment in his or her past, a moment that was extremely distressful at the time but upon which we can now look back with some amusement.

I was 14 years old, and I was asked to serve as an usher in my sister Roberta’s wedding.  She was to wed the Reverend Paul Carruth, and the ceremony was to take place in the church where he served as pastor.   It was my first experience with that sort of thing, and I was both honored and a bit intimidated.  Excepting the flower girl, I was much younger than anyone else in the wedding party.

The big day arrived, and I and my fellow usher, a minister friend of the groom,  escorted arriving guests to their seats, proffering arms to the ladies as was the custom.  As one of our last acts before the bridal procession, we went forward to light the candelabra that stood in the front of the sanctuary, one on the right and one on the left.  Mine was on the left.

As I touched the lighter to the top candle, I discovered to my horror that it was loosely inserted in the holder.  The candle toppled over, and, like dominoes, the other candles followed.  My attempt to stop them only made it worse.  Every candle hit the floor.  I stood there in red-faced confusion.  I wanted to sneak out of the back door of the sanctuary, but at that critical moment the other usher arrived on the scene and helped me restore some order.  Together we pot the candles back in place, now secured with candle wax, and lighted them.  The two of us then retreated to the narthex where my sister and her attendants were awaiting the processional music.  Roberta was in tears, and I thought it was because I had made a hash of her wedding.  Actually, I soon discovered that hers were tears of nervous excitement and joy.  I’m not certain that she even knew about the candles.

I somehow survived the rest of the ceremony without further mishap.

It was a beautiful wedding.

One thought on “Candelabric Catastrophe”