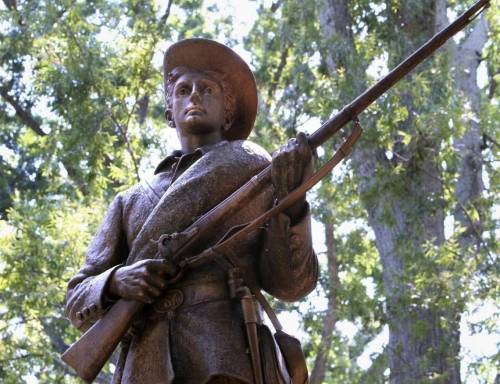 Final arrangements were recently concluded for the disposition of the statue Silent Sam, a memorial to the thousands of North Carolinians who fought for the Confederacy during the Civil War.  Silent Sam had been ripped from his pedestal on the University of North Carolina campus during a demonstration in 2018.  Recently, many other Confederate monuments have suffered a similar fate.

The state of North Carolina was very reluctant leave the Union, and when South Carolina and other deep South states seceded soon after Lincoln’s election the state’s leaders urged a wait and see policy, hoping the conflict could be resolved.  When Virginia seceded in April 1861, North Carolina found itself geographically surrounded by the coming rebellion.  Final peace efforts failed, and the Tar Heel state seceded on May 20, 1861, the next to the last state to do so.  It was a fateful and tragic decision, but under the circumstances North Carolina’s  leaders probably had no other choice.

Despite its reluctance to enter the war, the state did more than its share during the struggle. North Carolinians served and fought for a variety of reasons.  Many volunteered, others were conscripted.  Joining with friends and neighbors to resist what many considered Northern aggression was the natural and expected thing to do.  Probably fewer than 25% were actual slaveholders or sons of slaveholders.

It was a devastating conflict.  Approximately 125,000 North Carolinians  bore arms during the Civil War, and an estimated 40,000 of these men died in battle or succumbed to disease.  Then there were the surviving wounded.  It is hard to imagine these numbers.  As a percentage of the population, it would be the equivalent of America losing more than 4 million war dead in World War 2, ten times our actual loss. Casualties like these are a profound shock to any society.  Some towns lost virtually all military age males.

The state slowly recovered in the years after the war, and the scars of conflict remained visible in the countryside and were embedded in the bodies, hearts and minds of survivors.  Citizens of the South began erecting monuments to their honored dead.  It was not so much to memorialize the Confederacy as to pay respect to those who had been willing to pay the ultimate price in defense of home and hearth.  Silent Sam was thus erected to honor the nameless men who served their state, and he stood as a mute sentinel on the University of North Carolina campus for more than a hundred years.  He was toppled from his pedestal more than a year ago and now awaits placement in a site less offensive to our more sensitive citizens.  I hope such a place can be found.

The silent sentinel stands no more in its chosen space;

Rough and angry hands tore him from his special place.

This tribute to our honored dead fell victim to the rage

Against the cause in which those heroes did engage.

Tear down the statues if you must, but continue to honor those brave men who fought for a cause they believed just.