In 1948 I was attending the University of North Carolina in Chapel Hill.  When school was not in session I lived with my parents at Carolina Beach.

In the summer of 1948 Dad, Mom and I got into the family car and headed west towards Arkansas to visit with my brother Branch and family.  Our route took us through Charlotte, Asheville, and Memphis as well as many other cities and towns.  There were no interstates in those days and few by-passes.  Most of the roads were two lanes, and many of them were under repair. World War II had ended only three years before, and there was much maintenance and new construction underway.

The most interesting part of the trip occurred early in the morning of the second day.  We had spent the night in a motel in Canton, North Carolina.  Dad couldn’t sleep that night.  He was up and down every half-hour or so with an asthma attack.  Mom and I managed to get in a few hours of sleep despite Dad’s problems.  At about 3:30 or 4:00 that morning Dad woke us up and announced that since no one could sleep anyway we had just as well get on the road.  Within a half-hour we were back in the car and headed west.  As we climbed out of the valley and into the hills we entered Soco Gap, the highest elevations on that highway and a place once used by the Cherokees as a lookout and “ahaluna” or ambush place.  At that time of day, the clouds were resting on the mountain peaks and the fog was so dense that you would have difficulty seeing your hand in front of your face.  Dad stopped the car in the middle of the road and announced that he couldn’t see at all.  He asked me to take over.  I’m sure I couldn’t see any better than he did, but by keeping the lights on low beam I could barely discern the stripe down the middle of the road.  I straddled that stripe and prayed that there were no other fools on the highway coming from the other way.  Somehow the dear Lord got us down that mountain and on to Tennessee and Arkansas. 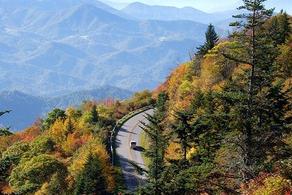 I am certain that many of you have had similar experiences while driving.  You are caught in a heavy fog or a torrential downpour and no longer can see what is in front of you, what is behind you, or what is on either side of you.  If you continue driving you might strike a vehicle stopped in the road ahead; if you stop another vehicle could strike you from behind; f you try to ease off the road to your right you might end up in a ditch or off a cliff.  What do you do in that situation?   Any advice?  On those few occasions that it happened to me I moved forward slowly, hoping I could stay on the road in the proper lane, and prayed that the fog would lift or the rain stop.

Praise the Lord, somehow it always did.

It is often said that God protects drunks, fools and little children.

One thought on “Fog on the Mountain”